So, our dog Topo is getting old. He's going to be 14 next month. We couldn't ask for a better guard dog, and he did his duty proudly for many years. He's a cute old man, and we love him dearly, so we're letting him retire and getting him a friend, one younger and ready to take on the guard dog responsibilities. 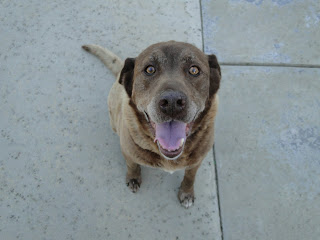 So, yesterday we headed off to just "look" at a 5 month old Doberman. Both hubby and I thought for sure we wouldn't really want him, because he's not black and rust. But oh boy were we wrong. He has a very sweet temperment and is beautiful to boot. He melted my heart! We tossed some names around and stuck on Dexter, which almost everyone agreed on. 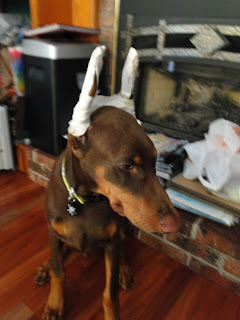 This dog is already completely, thoroughly rotten spoiled. Dexter came home with us last night, and as we were going to bed, we weren't sure how we were going to get him to lay still. Topo sleeps in the crate and he's not much of a sharer. I thought I'd gotten Dex to sleep alongside our bed, but as I climbed under the blankets a wet nose was snuffling my cheek. Hubby says,"just let him up." I'll be darned, I wasn't expecting that! Dexter snuggled down right between us and nodded right off. But, just like any other kid, he sure is wiggly. And at one point in the night I woke up with 40 or 50 pounds of Doberman draped across me. Let sleeping dogs lie? Not if they're keeping me awake!

I'm guessing there'll be more posts about Dexter in the near future. Luckily he's pretty much potty trained, and he did very well today on a lead for the first time. Just going to be working hard on all those basic commands and then some. Good thing Dobie's are so smart!