I'm the master of fright...

Just going to share a few pics from the Nightmare Before Christmas walkthrough/haunted house I created for my daughter's elementary school.  The pictures are a little fuzzy, as I think there may be something wrong with my camera's auto focus...grr.  Hope you enjoy! 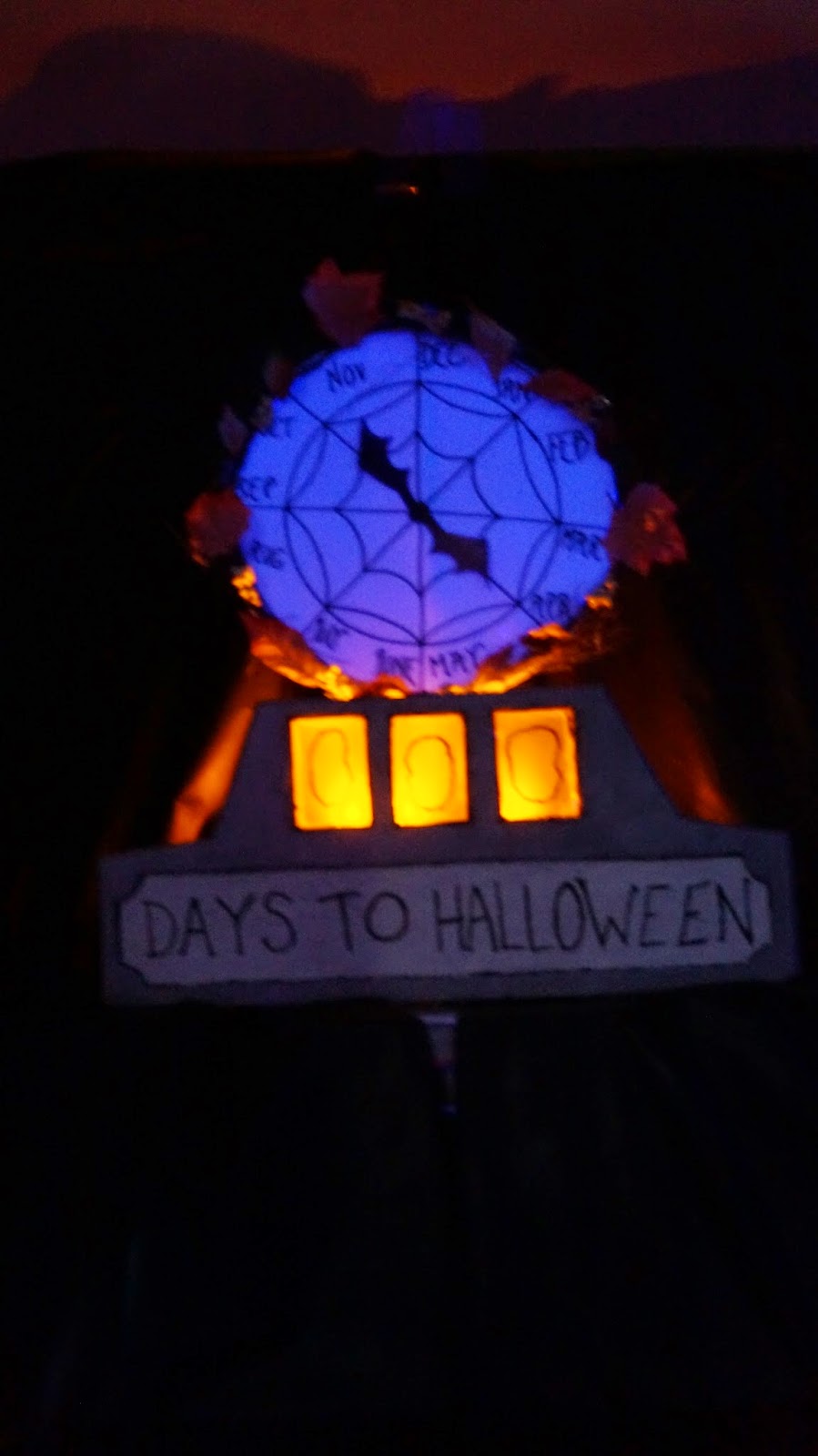 How many days till Halloween?  Fun little countdown clock made with that pink foam insulation, a piece of white posterboard, shrinky dink plastic and cheapo little tealights to make it come aglow : ) 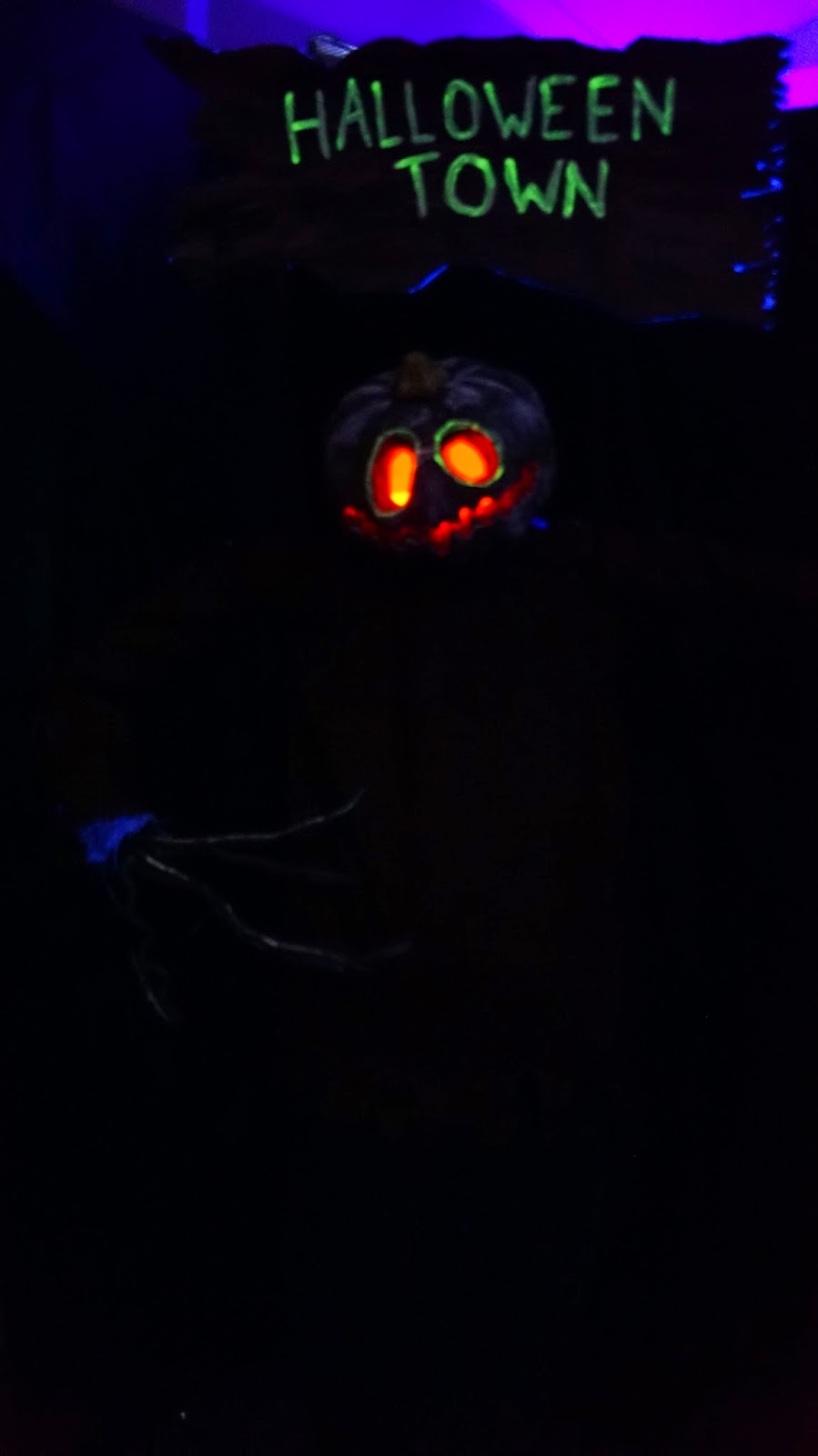 A scarecrow jack pointed the way... 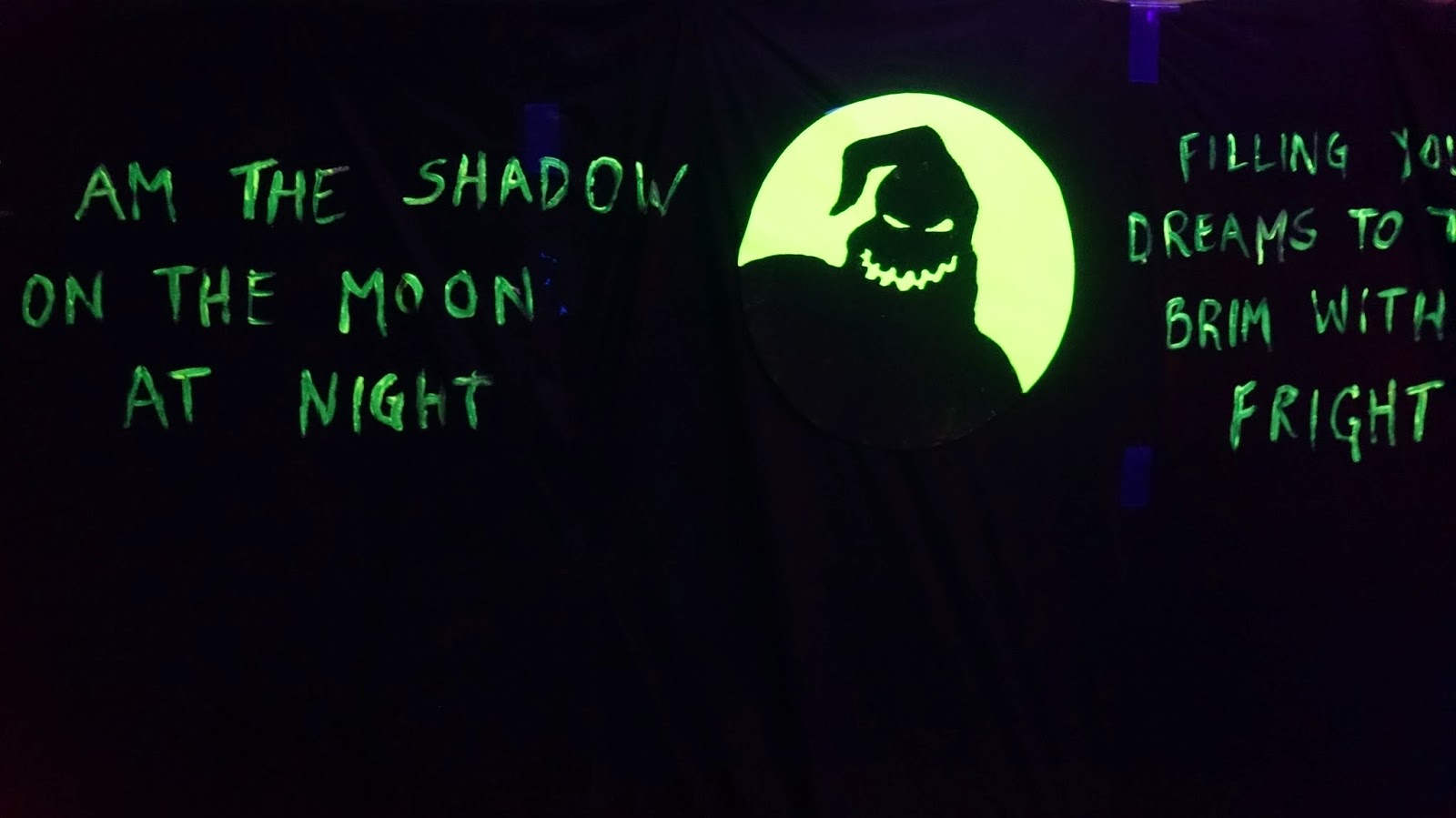 A glimpse of Mr. Oogie Boogie...BTW, Sierra, my 11-year old gets props for painting that for me : ) 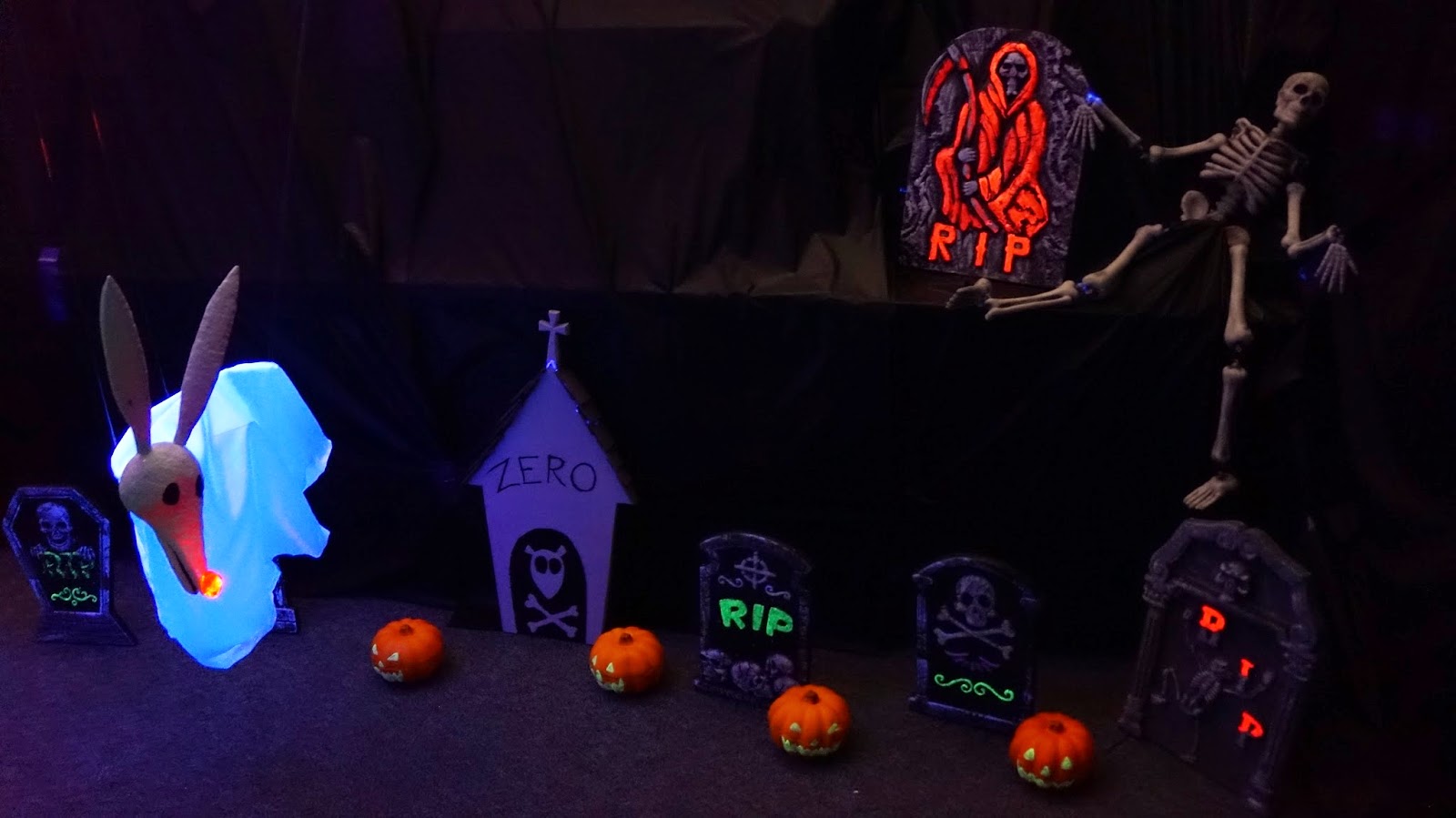 And Zero made an appearance, floating in the air all magical like, hanging out by his doghouse, hoping Jack will come by. 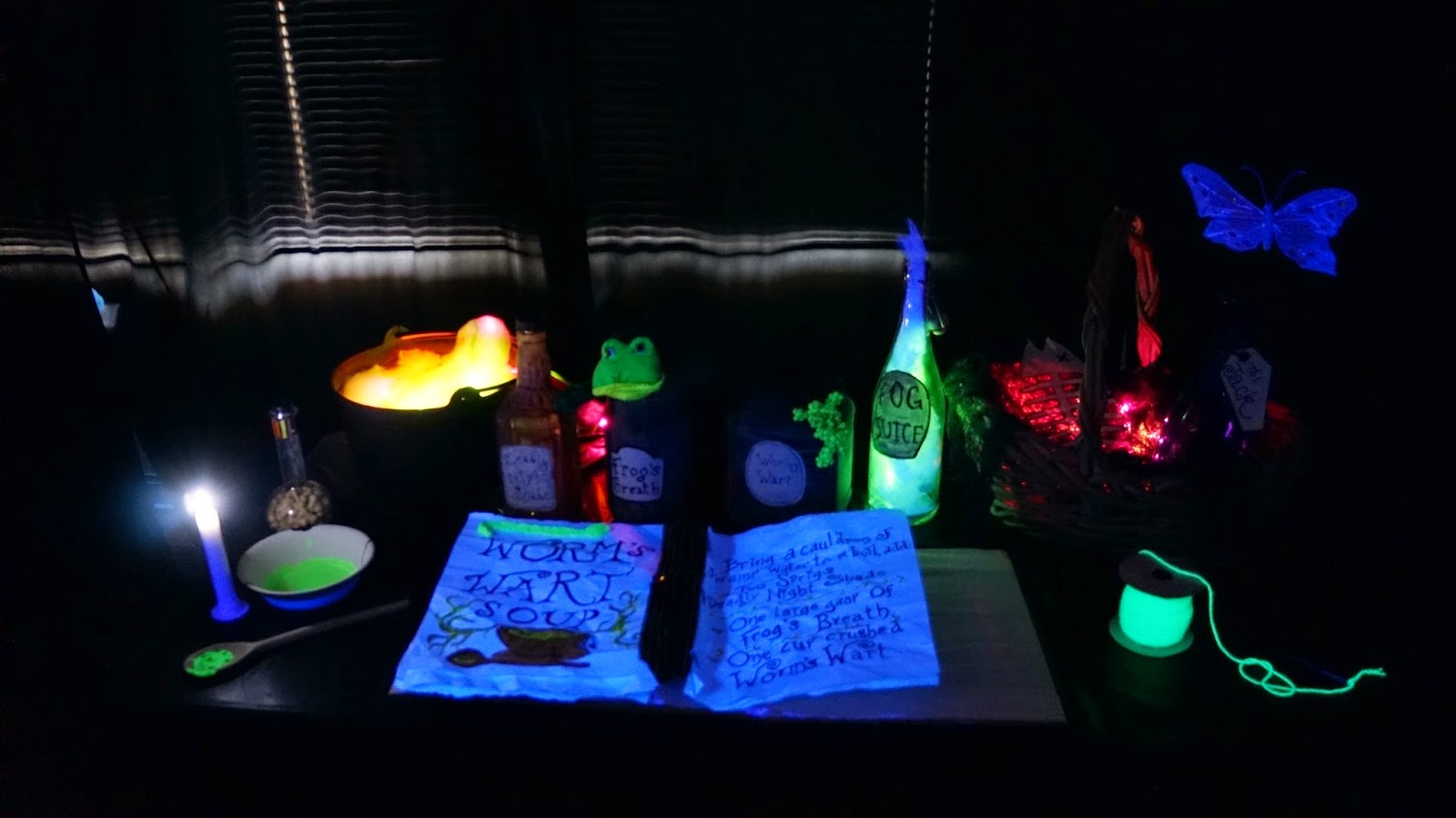 Sally has been a busy girl, making a basket of treats for Jack, whipping up some fog juice to try to keep her man on the ground, and we all know what she's making for Dr. Finklestein.  A bit of Nightshade, a gasp of Frog's Breath, and some...Worm's Wart, Worm's Wart...where is that Worm's Wart? 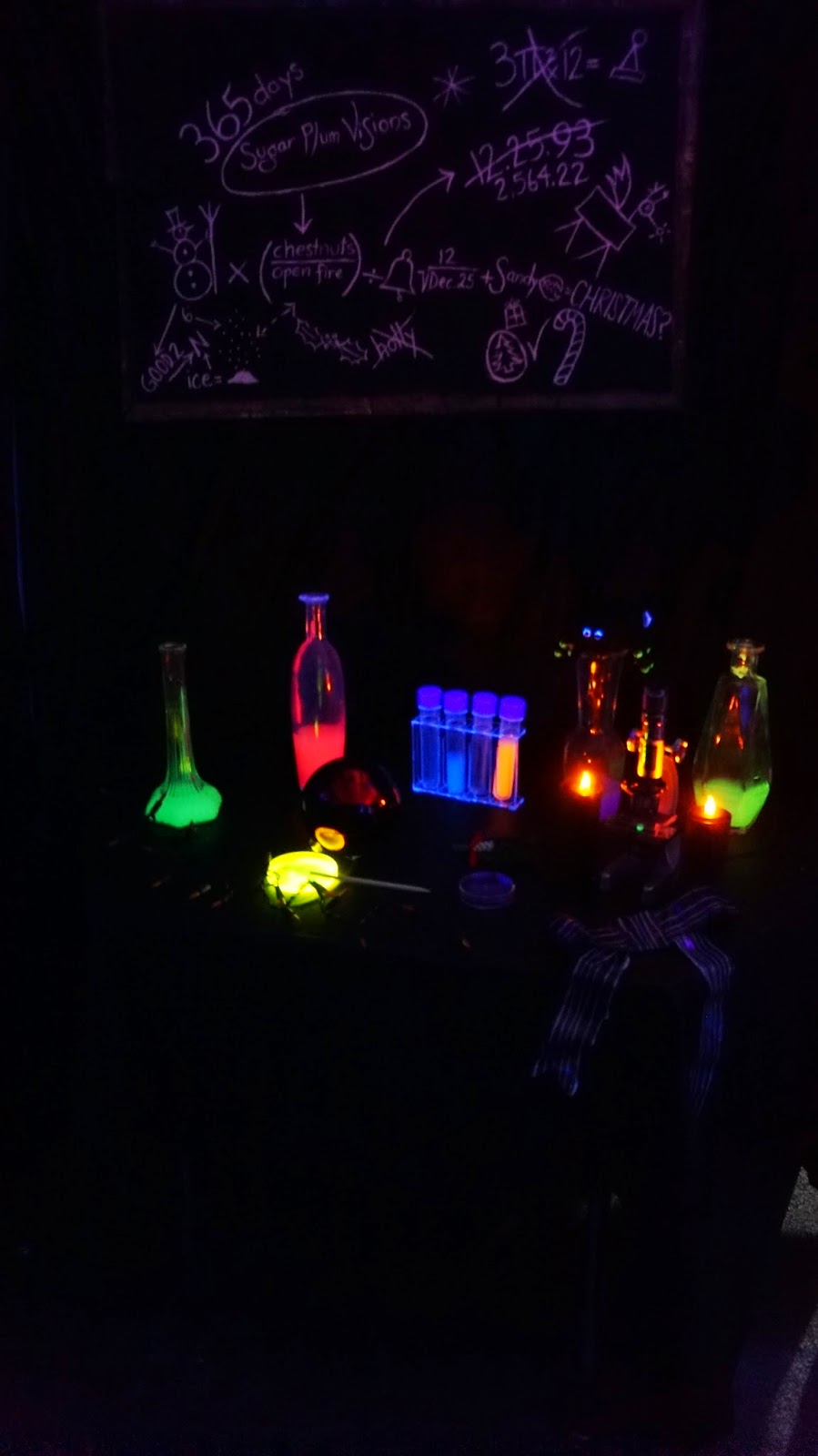 Jack had been busy whipping out an equation about Christmas...not sure it helped him much though.  Seems a bit confusing. 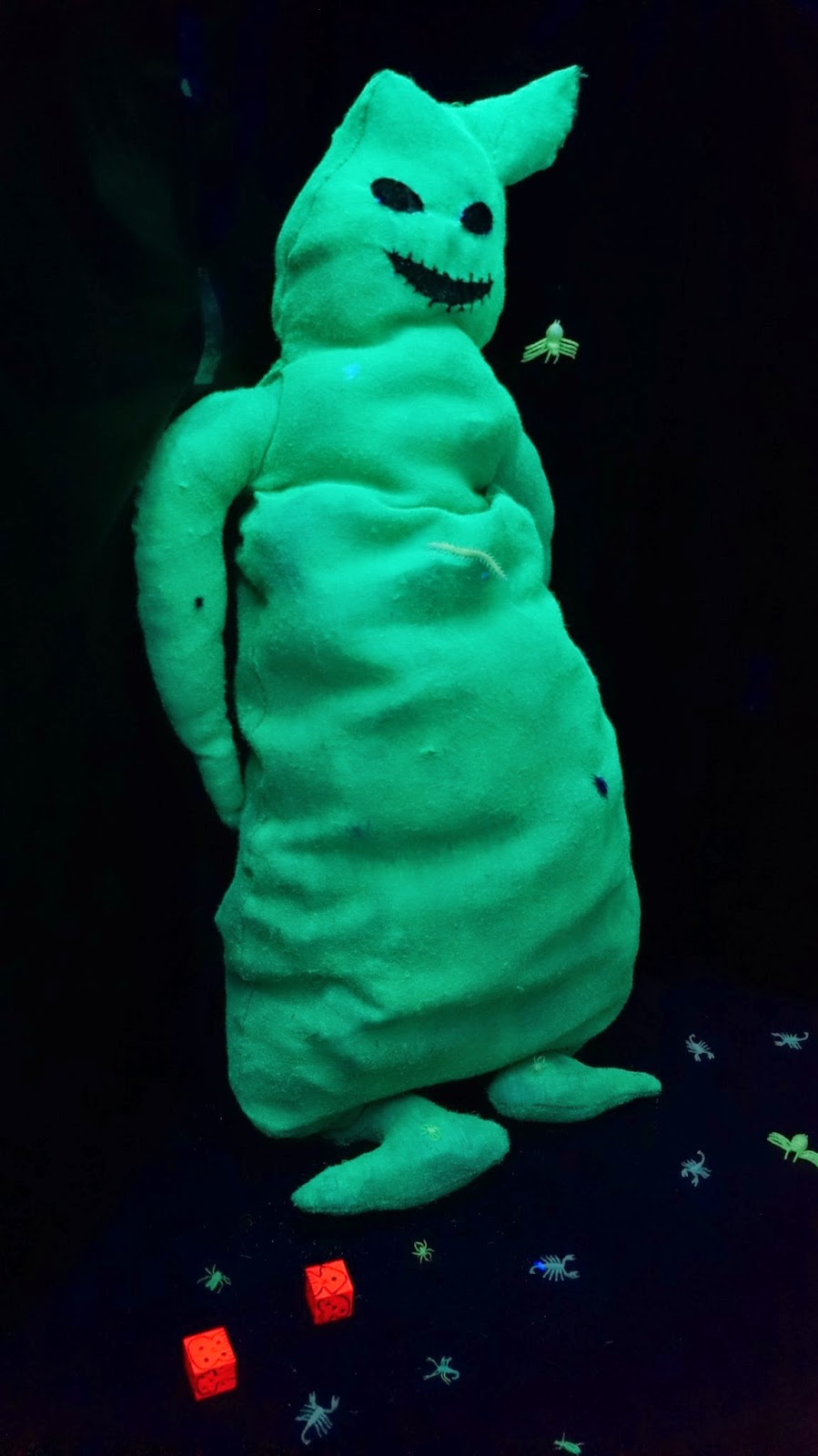 And. we had an appearance from Mr. Oogie Boogie himself...tossing his dice, trying to keep his bugs in line... 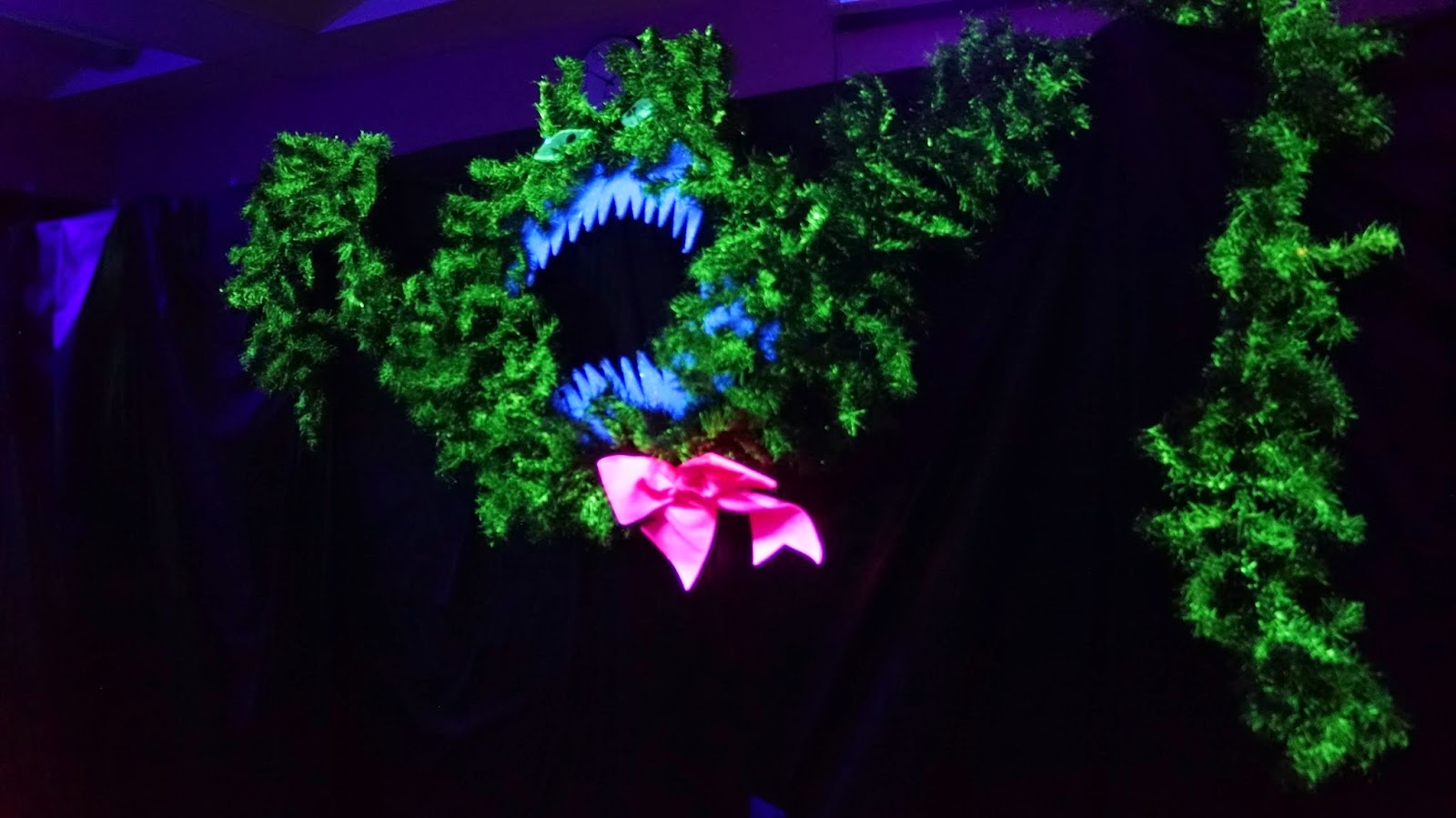 Jack's Christmas decorations are a bit out of hand...To make this guy show up under black light, I painted him with GID paint.  Yup, I did.  All those needles.  That's dedication for you. 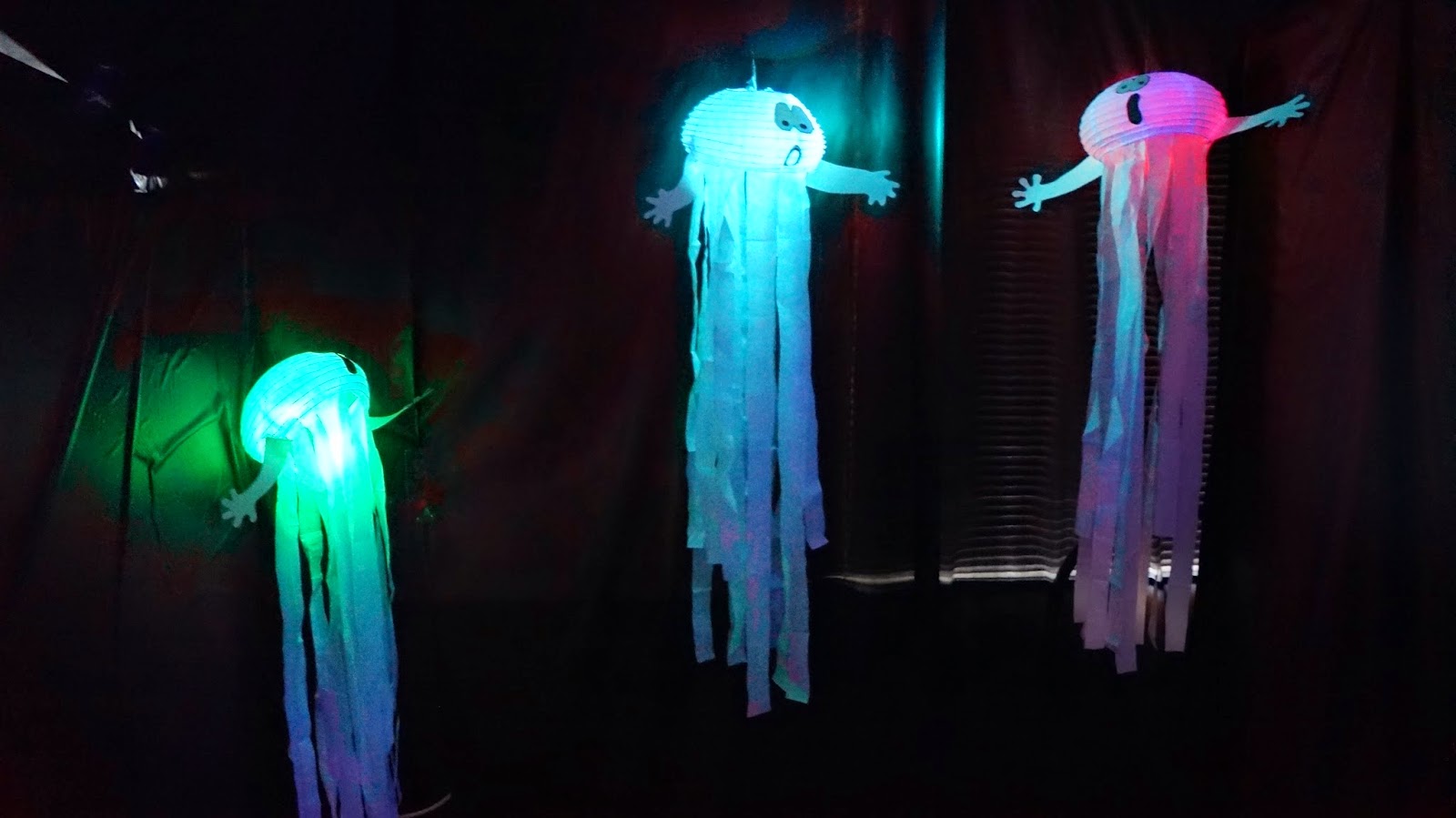 This trio of ghosties were jelly fish in my Pirates of the Carribean haunted house...reuse, recycle.  So cool to be able to use them more than once! 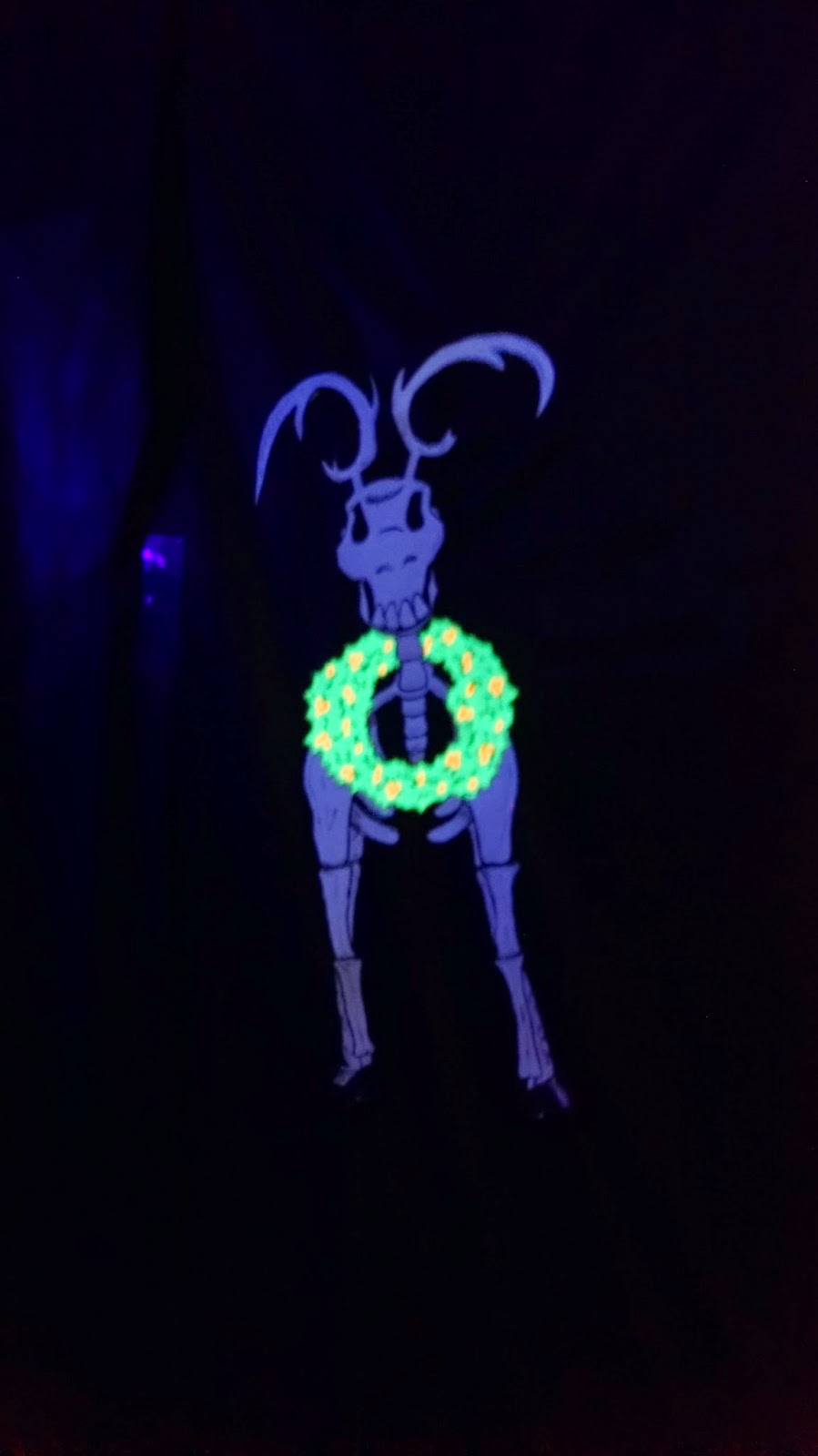 There's actually a trio of these reindeer, but you get the idea. 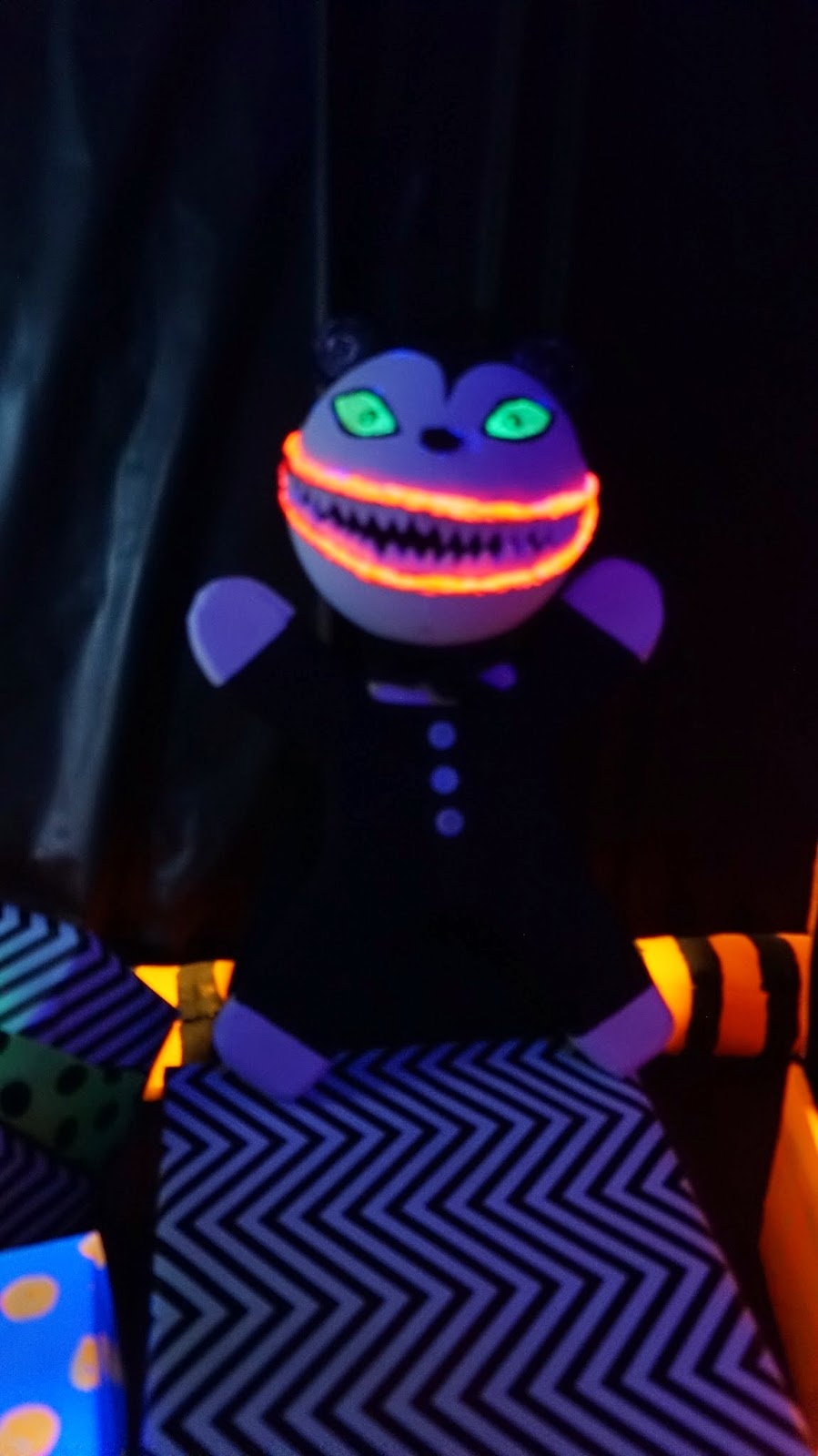 Scary teddy is my favorite Nightmare toy.  He turned out so awesome!  Love him. 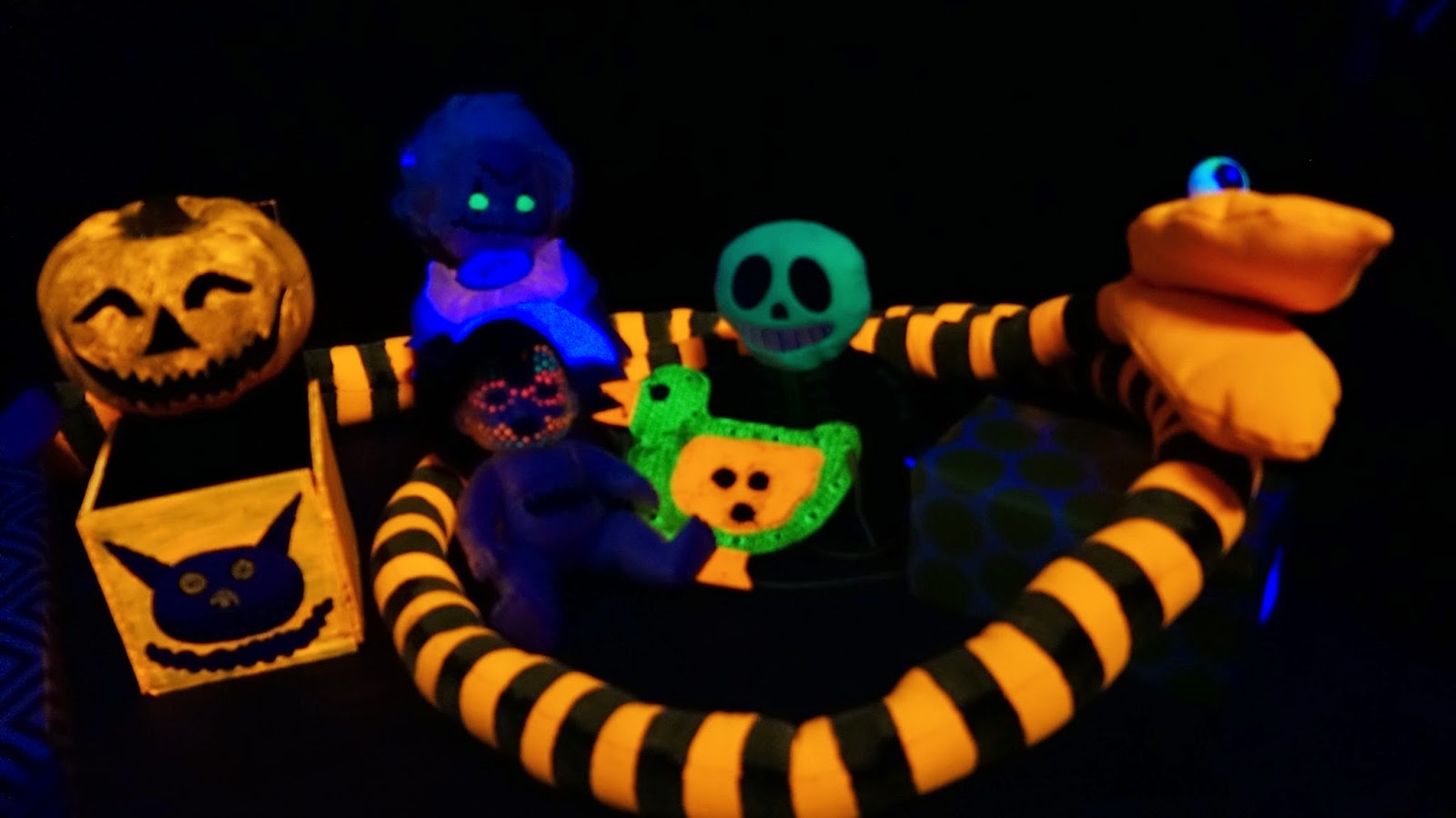 Some more toys Jack loaded on the coffin sleigh.  Hubby made the coffin for me a few haunted houses ago, and it sure has come in handy, as a coffin, as a coffin boat for a skeletal pirate, and now as Jack's sleigh! 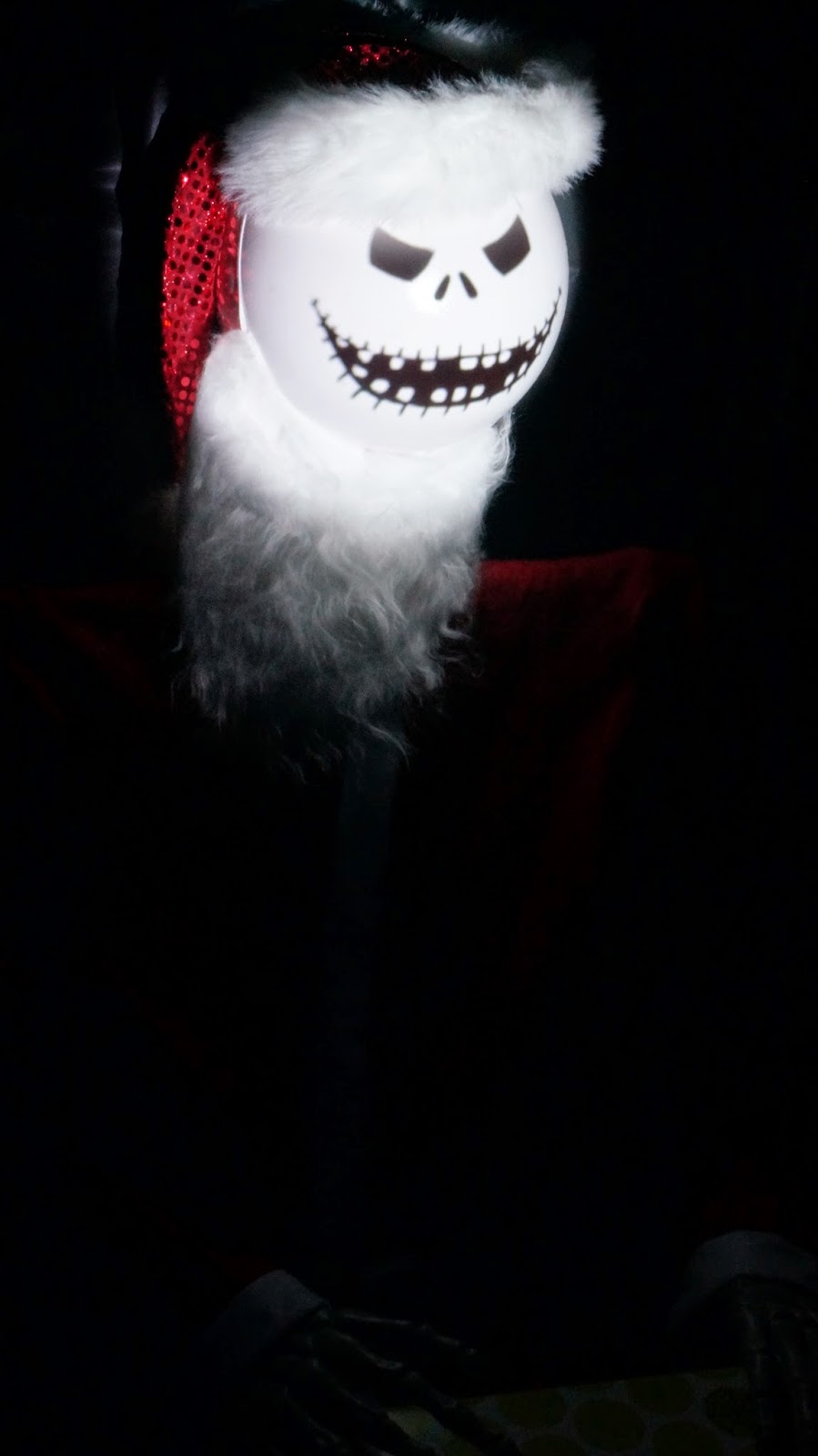 And Jack himself made an appearance, singing his little heart out.  so nice of him to take some time and delight the kids with his Master of Frightfulness : )

So, Sierra is a sixth grader this year, and I'm stepping out of the haunted house business.  It is so much fun, but takes up like an entire month of my time, and I'm so exhausted when it's over.  So, we ended with a bang I think, made some of the coolest props I've ever made, and I saw so many excited little faces on Friday, that I'll live off that for a long time.  One little girl went through the haunted house 7 times!!!!  I think she liked it : )

If you have any questions about any of the props, how to make them or anything like that, I'll help you as best I can : )
Posted by Unknown at 7:23 PM