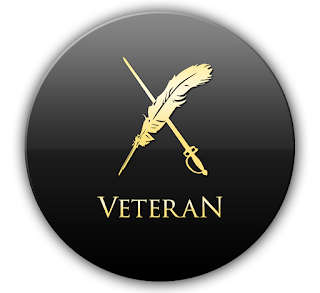 I feel like singing the Hallelujah Chorus today.  For I have been absent from posting to WeWriWa for a good long time, but here I am today...with eight sentences from Return of the Crown.  So, without further ado, though you can hum a little Handel if you feel so inspired, here's eight sentences just a bit further from where we left off last time (Blade was down climbing a steep cliff trying to find Ravyn, who he hasn't seen in 10 years or so).

Ravyn held her breath as Blade began edging across the cliff wall.  It looked impassable.  But Blade's hands moved from crack to crack and nub to nub, denying gravity's desire to take effect.  Never once did his feet slip from the tiny rim of rock jutting out from the cliff face.  He slid across the rock as if he were water.

Before she knew it, he was standing in front of her.  His arms wrapped around her, and they were both weeping with joy.  Tears sprang to her eyes, and Ravyn lost herself in the safety of his arms.

What do you think?  I know many of you thought Ravyn was a bit harsh with our Selkie friend Seamus, but Blade's got some skills : )  I look forward to skipping through your eight sentence shares!  And now as I glance at the colorful words on my page, I've got a hankering for something...Candy corn!!!