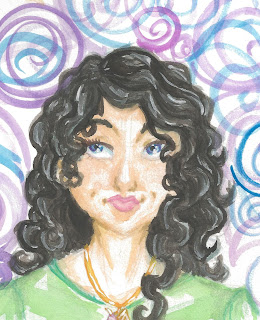 Princess Ravyn, I know you're pretty busy, but could you spare a few moments? I have some friends who'd like to get to know you a little better.

Oh, Millie, it's you. I haven't seen you in awhile. But, I've been so busy rebuilding the city after my Aunt Zelera destroyed it, I hadn't noticed you weren't hanging around anymore. By the way, did you hear the news?

Blade asked me to marry him! I'm so excited. I've never been happier. To think, just a few months ago I was living on that tiny little island out in the middle of nowhere. No cities, no magic, no books, just sand and surf.

That doesn't sound so bad, I know a lot of people that pay good money to vacation in places just like that.

Well, it was scary when I first landed there. Imagine if you'd been ripped away from everyone and everything you had known by magic. You are flung across the sea in a little ball of Light and deposited on an island. You walk all around the island and you don't see a soul. You are alone. And to top it off, you're just seven years old.

Yes, you were little, and yes, that would be very scary. But I think you are exaggerating a little. You weren't alone. What about Rowan?

Well, he didn't show himself to me for several days. Obviously, after he introduced himself to me, life got much better. In fact, the island became my home. I didn't want to leave. I was safe there, Aunt Zelera didn't know where I was, and Rowan, he's the best substitute father a girl could ask for.

Yeah, turning sixteen sort of shook your world up, didn't it.

Most definitely. It's funny. I grew up watching my mom when she was manipulating the Light, and I suppose that I knew I'd be gifted with the ability to work with it as well, but being isolated for so long, I'd forgotten all about it. It was pretty crazy when little magical things started to happen all around me. Lucky for me Rowan, who's an elf, has been around for awhile and knew all about the Light.

Ravyn, my friend's don't know what the Light is.

Oh, sorry. In Aigerach, that's my country, the Light surrounds every living thing. If you have the gift, you can "see" it. Each of us has different colors of Light associated with us...I think in your world you might call it an...aura? The Light can be manipulated to do wondrous things. Can you see the Light Millie?

No, I'm afraid I don't have that ability. I wish I did.

Oh, your Light strands are turqoise and a buttery yellow...so pretty. Mmm...and the scent associated with them is like salty sea air.

Yes, usually the smell is pleasant. But the scent of the Darkness...it makes me retch just thinking about Aunt Zelera's magic...can we talk about something else. I'd really rather not think about her.

Sure. I understand. She is one nasty witch.

Millie, I don't want to talk about her.

I know, but why do you think she turned out like she did? Your mom is like a ray of sunshine and Zelera's so...vile.

I don't know. Jealousy, plain and simple. Or lack of self-worth? I guess she never felt loved. Now really, if you don't change the subject I'm going to leave.

Okay, I understand. I wouldn't want to talk about it either, if my aunt tried to kill me. Over and Over. She sure is relentless.

I'm getting up now.

Sorry Ravyn, I just think people might want to get an idea of what you were up against.

Are you sure she's gone? For good?

That's what I was told. I have no reason to believe otherwise. Have you heard something?

Me? I don't know anything. So, anyway, I heard you met some really neat creatures along your journey. I personally love Ena, but I'm partial to dragons. My daughter Sierra liked the shark, but she loves all sharks. Shark week is big around our house, all year long. Do you have a favorite?

That's not fair, asking me to make that choice. Doing that could cause civil unrest. The harpies and unicorn are getting along very well right now thank you. And the wolves, well they just want to be left alone, as usual. And you know I've always wanted to go to Draconis Island and study the dragons. No, I just won't say.

Okay, so this shouldn't cause any civil war. You travelled all over Aigerach; through meadows, over mountains, staying in its quaint villages, etc. Where is your favorite place to be?

No, it's not. I could be locked back in that dark dank cave again, but if Blade was there it would be heaven.

I know you, you have a lust for adventure. You're going to want to get out of the castle soon. Where will you head first?

I would love to go back to Draconis Island with Blade, it's a lifelong dream of ours. Ena is an amazing dragon, and I'd love to see how her babies have grown. Maybe when things quiet down around here, we can sneak away.

I imagine meeting Ena was pretty intense. Come to think of it, after you left Rowan on the island, you went from one harrowing experience to another. I know I got a few new gray hairs just chronicling your adventure. What was your greatest fear?

There were a lot of times I was a heartbeat away from death's door. That's to be sure. And I was scared witless on more than one occasion. But, I think the worst was my fear of failure. I didn't know if I was strong enough, or brave enough, or smart enough to save my parents, to save Aigerach. The world rested on my shoulders and any slip or stumble would send it all crashing down.

Well, I think you did a pretty good job.

I made plenty of mistakes along the way. But, one can't sit about crying over their mistakes. Besides, Princesses do not cry.

Umm, yeah, you do. You did on more than one occasion.

You know, you can be a royal pain.

All right, I'm leaving now. It was really nice to meet you all. I believe Millie took the time to document my story, it's got all the nitty gritty details. I believe she said you could find out more about it at www.returnofthecrown.com